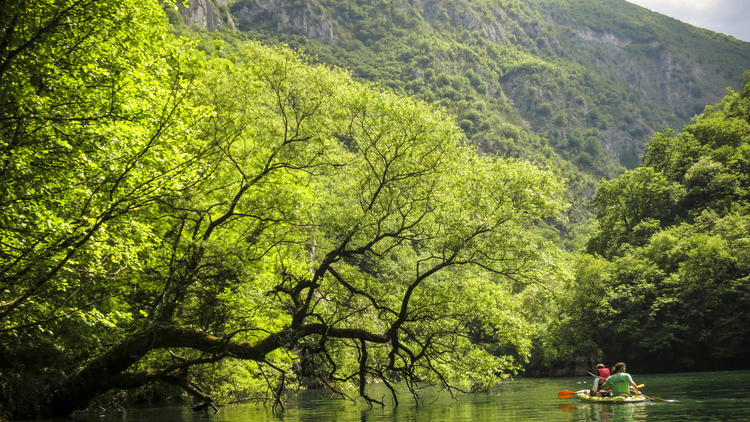 Kayakers on Matka Lake outside the Macedonian capital of Skopje. (Margo Pfeiff)

Macedonia, a landlocked Balkan country squeezed between Bulgaria, Serbia, Greece, Albania and Kosovo,  is one of Europe’s best surprises.

Part of the former Yugoslavia until its independence in 1991, it is an exotic melting pot of civilizations at the crossroads of East and West.

Wildly mountainous with spectacular rivers, peaks and national parks, it is also rich with the cultural mementos of a long, turbulent history of invasions and occupations by Persians, Romans and Ottoman Turks.

Roughly the size of Vermont, Macedonia (pronounced locally “Mack-edonia”) today has a parliamentary democracy and is a safe, friendly and inexpensive country in which to travel. Best of all, with tourism in its infancy, it is still charmingly unpretentious and warmly welcoming.

That also means it’s wise to expect minor logistics hiccups as it is still a developing country, one of Europe’s last undiscovered destinations that almost no one — not even Western Europeans who flock to nearby Croatia— has visited.

Its official name is the Former Yugoslav Republic of Macedonia due to continuing protests from Greece about using “Macedonia” because it has a region with the same name.

I visited Macedonia for a week in May for a cultural immersion in both the capital city of Skopje (“skop-yeah”) and the historic UNESCO World Heritage town of Ohrid, at the opposite end of the country, to sample tasty traditional cuisine that hints at Greek and Turkish influences and sip the country’s fine local wines and fiery rakias, or fruit brandies.

Read more in the LA Times…

Read more on our blog…

If you want to visit this place contact us.